The dream-inspired project ‘The Other Side Is Blank‘ has finally arrived blinking and yawning into the full light of the waking world. The estimable Equation Records has done a bang-up job serving as midwife for this lopsided creature, and huge thanks are directed their way. The package consists of  a 1-sided LP and a 1-sided 7″ (titled ‘Skirr’); a screen-printed, fold-over LP cover with blue & black drawings taken directly from the record in the dream; 4 inserts with plenty of artwork & information; and a fold-over 7″ cover with a signed teeth-print on the inside. Several collage pieces done in the classic Organum style are scattered throughout. The edition is limited to 100 copies. 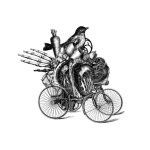 I’ll soon have some copies listed in the shop, but the bulk of the edition is available from the label’s website here. Equation is selling them as a pre-order, as they will not be able to ship them until the end of the April. My copies are on hand but I’ll only have 12 or so to sell; between the two of us we should hopefully be able to provide a copy for anyone who wants one. I’ll post an announcement when the listing is ready.

“In a mostly deserted indoor shopping mall (the kind that used to be everywhere in California) I’m looking for a shop where David Jackman is supposed to be doing a … lecture? Or maybe a performance? When I find the room, it looks like a classroom at a community college. Mr. Jackman is already there. Apparently the few photos I’ve seen of him are all wrong: he’s actually an elderly Amish fellow, with a stereotypically Amish-looking white beard (sans moustache) and looking the very picture of style in an Irish tweed suit and cloth cap. Whatever else was supposed to be happening is instantly forgotten when I spot a large fold-out table against the wall piled high with new Organum LPs. All the albums have white sleeves with hand-drawn covers and hand-written text, and somehow I know that all of the LPs inside are one-sided. Everything is very reasonably priced and I waste no time grabbing as many of the gorgeous little darlings as I can carry. The cover of the one on the top of my pile has a stylised bear’s head drawn in blue and black ink on the front, and a similarly rendered fox (with overlarge ears and an oddly-proportioned body) on the back. The title, or perhaps just an explanation, is handwritten on the front: ‘The Other Side Is Blank’.”