I’ve once again found myself needing to stir up a little bit of incoming fiscal flow, so I’ve selected four never-before-released recordings from the irr. live archives, given them a thorough, deep-down-to-the-molecules sprucification and posted them to Bandcamp for the vexation & delight of the befluxified world.

Each of these four shows represents a unique moment in my very scattered history of public performance, and I think I’ve managed to make them all worthwhile & listenable despite the technical problems that seem to be an inevitable part of irr. live performances & any attempts to record them. To this end, I’ve scoured through all of the available rehearsal recordings and used these to help ‘patch up’ the few areas that couldn’t be repaired by other means.  For each of the four shows, I’ve also included rehearsal selections that sounded particularly good to me and captured a (sometimes entirely) distinct version of a performance. Given the loose parameters and improvised nature of much of the material, each attempt tends to give significantly different results; and since I rarely do live shows, most of these variations only take place during rehearsal.

The first selection (PP#21) is the recent(-ish) Imbolc Sleep Concert performance from February 2019 at Azøth in Portland. The event was organised by Soriah’s Enrique Ugalde, and featured continuous evening-to-morning somnifacient exudation by the likes of myself, the aforementioned Soriah, Esperik Glare, Solace, Xambuca (in pre-recorded form) and many others. This was the first live show I’d done since 2012 and also the first since my embolism at the end of 2017, so it was good to have the opportunity to get out in the world and poke bat’s teeth into the bouncy castle of light entertainment once again. As prescribed by the context, it’s the most deliberately minimal and atmospheric set I’ve done to date. What didn’t change at all were the multiple technical snafus, which required a lot of spontaneous re-figuring as I went along. The full recording of my final rehearsal on the afternoon before the show has also been included since the end result turned out to be so different.

The source photos used for the graphics were extracted from a video made by Shelby Kray, who operates as BlueHeronVideo and recorded a large portion of each of the performer’s sets throughout the entire sleep concert. Her video of the last 30 minutes of the irr. set can be found on YouTube here — but I am compelled to mention that the audio is (understandably) very poor: it was just captured from her camera’s microphone, and, since she was standing right up against the stage and not in front of the PA, only a murky, inconsistent blur of what was happening can be heard. Even more embarrassing for me, certain things that are only supposed to be heard after being put through effects (like the haphazard recorder tootling) are clearly audible to the camera. So maybe watch the video with the sound muted and the play the proper audio recording in a different browser window.

The second posting (PP#19) is the only irr. performance to date to take place outside of North America. The show became possible when Nurse With Wound signed on to perform at Leipzig’s Wave-Gotik-Treffen festival in 2010: it’s always been unlikely that any organisers interested in staging a European irr. show would be able to cover my travel expenses, and I can hardly afford to do it myself, so this was a rare occasion where I could get around both of those impediments. Potter, Liles and I each took advantage of the opportunity to arrange solo sets for ourselves at this festival. Listening back to the recording now, I think my set actually turned out pretty good — but at the time I thought it was a complete shambles. A decent albeit cacophonic rendering of Nurse With Wound & Diana Rogerson’s ‘Wisecrack‘ (or ‘Reach For Your Gun’ for the Chrystal Belle Scrodd version) is in there, as is the nearest-to-fully-realised live version of my chart-breaking disco anthem ‘Caniad At Yr Annisgwyl Sbasm’. Fortunately, there were a few very supportive & enthusiastic people in the crowd, but I think overall it was not something that Goth festival-goers wanted to endure. One cheerful person in a sparkly, red-sequined top hat came up later in the day to tell me how much he enjoyed it, and that bolstered my spirits quite a bit. The acerbic response of a different audience member (wearing pseudo-military fatigues, of course) was more typical: “So you vere der von vith the funny puppets, ja?” The real heroes of this show were Nadja Belabidi and Eric Van Wonterghem, who gave Steve & I a comfortable place to stay during the festival, allowed me to take over Eric’s studio space to rehearse a few more times, and were helpful, lovely & supportive throughout.

Some video snippets of this performance are still lingering on YouTube here and here (and is the source from which I extracted most of the photo images). As always with these live clips, the sound is absolutely dreadful and you can hear too much of the incidental noises I’m making on stage, but it’s nice that someone captured some of it. Probably. 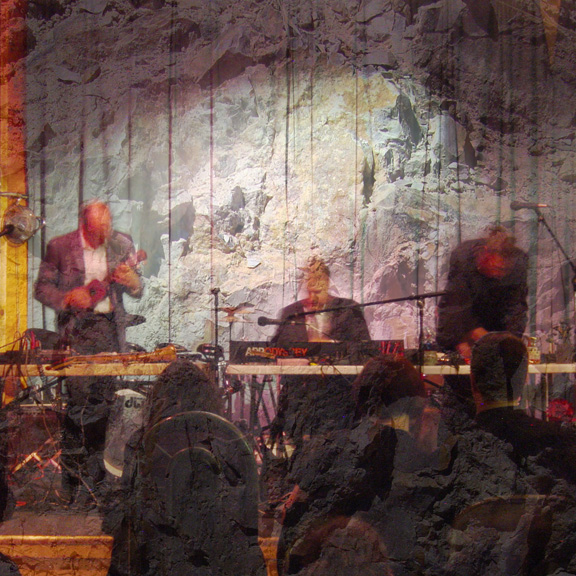 The third show (PP#13) is a peculiar one… it took place in 2007 at the storied Starry Plough pub in Berkeley, and was the last time I had three people in the line-up (and was one show away from the last time I had any other people involved). The Scharpen Brothers and usually Richard Faulhaber had been very helpful live co-horts for the first 8 shows between 2003-2005, but scheduling conflicts and other difficulties impelled some changes in 2006, and for three shows during 2006-2007 the cast was Richard and myself with rustmonger & Helen Scarsdale Agency honcho Jim Haynes (although Greg Scharpen did make a very useful contribution to one of those shows). I can’t remember exactly how this one was set up, but I have a suspicion that either Greg or the endlessly-helpful Jim Kaiser (RIP) was behind it. Larval versions of what would become ‘Annisgwyl Sbasm’ and elements of various other live tracks were debuted with this line-up (something I had entirely forgotten), and the whole thing is capped off with a severely brain-damaged, funk-stained version of The Resident’s pop classic ‘Smelly Tongues’.

This performance definitely was a shambles, but, again, hearing it 12 years later I find a lot to like in the recording. A big part of it is Richard’s always-inspired contribution: his William Burroughs routines (he also did the Burroughs take on the ‘Freaks’ intro for PP#5) and his modified Scottish Toasts never failed to get a laugh (particularly from me), while his mastery of extracting unusual sounds out of prosaic electronic devices — his inventive approach to pretty much anything, really — was a great boon that for many years elevated my clumsy & absurd method of doing live performance. (Richard was also the MC (and a performer) for the NWW shows in San Francisco, for those of you who attended those.) I’ve included an entire set’s worth of extracts from the rehearsals for this show that Richard & I did together at his house mainly because they demonstrate how spontaneous & adaptable Richard’s input could be.

I’ve just noticed that my show numbering had a flaw in it… I initially posted this as #14, but it’s actually #13. I’ve fixed it now, but apologies to those four people who already downloaded the misnumbered version (that means you, Mr. Rash). If any of you four want a free re-download with the right number attached, get in touch.

The final recording added (PP#11) is from the second irr. performance at the Temescal Art Center in Oakland — the first Temescal show also being the very first irr. live performance anywhere back in 2003. This one took place in 2007 as part of a record-release event organised by Greg Scharpen for his debut offering as Thomas Carnacki. Being that Greg and John Scharpen both had their own sets on the evening, this was my initial attempt at doing an irr. show entirely by myself. The execution was rather ungainly (especially being crouched down on the floor as I was), but some useful germ ideas were developed, and a few things were attempted that are entirely unique to this show. This is also the only live use of my 8-string bass guitar, with the exception of a peculiar Nurse With Wound performance (another record-release event) that took place a week later at Ameoba Records in Los Angeles.

One thing I keep forgetting to mention here: I’ve been doing a monthly radio art series on Mixcloud called ‘Stactirrm Radioo’ with my friend William Davison. A new episode is being posted every month during 2019, so we’re already more than halfway through the series. William started his own series called ‘Stactorm Radioo‘ in 2017, which was an half-hour’s worth of one-minute audio excerpts from the extensive & legendary William Davison archives. In late 2018 he asked me to collaborate with him on the project, so the half-hour now alternates between one-minute excerpts from the extensive & legendary William Davison archives and one-minute excerpts from the sordid & uncouth but still pretty darn extensive M S Waldron archives. As basic math will demonstrate, that means 19 excerpts from each of us every month. The results have been quite nice; but still, somehow, the errant ways of humanity continue unchanged despite our best efforts being made in one-minute increments.

Best wishes to you all,