I’m still working to get the copies of ‘4 Orphans’ assembled, but there are a few brief bits of news to mention in the meantime.

I will have little or no computer access between April 25th and May 3rd, so any messages or orders will have to be dealt with after the 3rd. 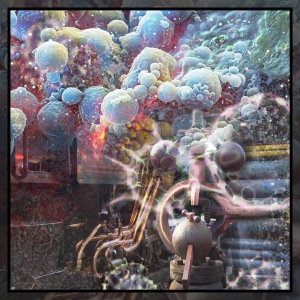 To keep on schedule with the monthly digital single series, I posted April’s entry a little bit early. You can find it here.

Also newly posted to Bandcamp: a freshly-scrubbed and slightly augmented version of the third irr. app. (ext.) album ‘Their Little Bones…‘, originally released way back in 1999. This was my first handmade project, packaged in a frame box with a unique little bone arrangement and hand-modified photograph. You can view a sample of both in the graphics files that have been included with the download. I made 108 of these villains before running out of materials and retiring the box version for good.

Added to this digital version of the album is the rare track ‘Whittling Little Crosses For A Half-Sleeping Heresiarch‘, recorded around the same time as ‘Bones’ and released by Plate Lunch in 2000 as half of a super-scarce split 7″ with the Australian project Rats With Wings. This 7″ was so scarce that for years I didn’t possess a single copy of my own (the record label never sent me any) until Christoph Heemann found one at a record swap in Bern and kindly passed it along to me. The quality of the original track was pretty dreadful, so this version has been fully reconstructed from all of the constituent sources for optimal audio fidelity (at least as much fidelity as old cassette sources will allow).

Full details about ‘4 Orphans’ in the next post, probably around May 10th.